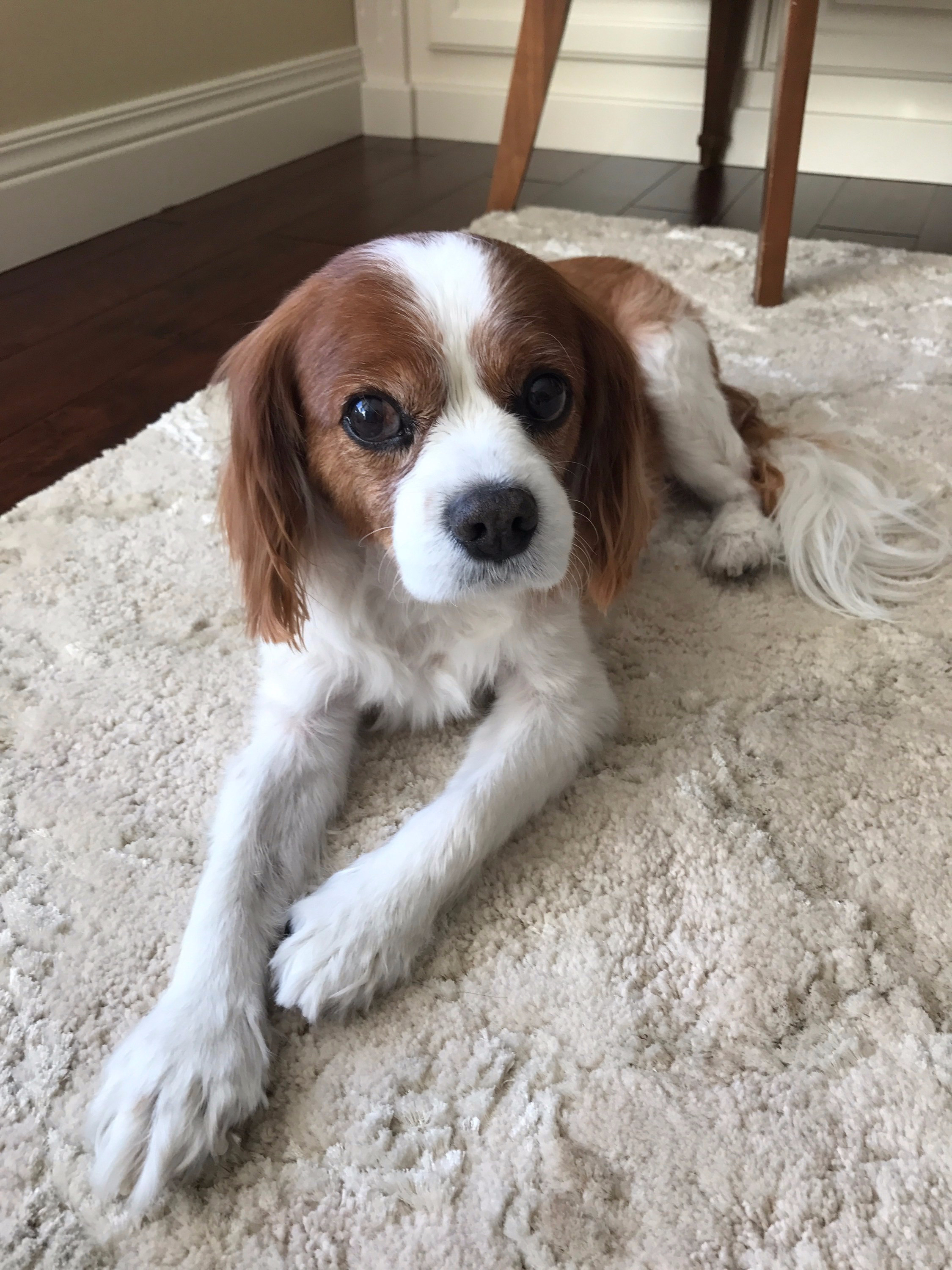 His 2005 profile on the Petfinder website said “Princeton” was supposed to be a breeding stud, but “he was too much trouble.” Maybe that should have been a sign.

On a December day, his girl drove from Chicago to St. Louis to pick up the Cavalier King Charles Spaniel from the woman who’d rescued him. The woman had several Standard Poodles which dwarfed the little Spaniel. When his girl drove up, she saw the tiny pup sitting behind a 6′ chain link fence. As he watched her approach, his tail wagged in the snow.

“Harley” went home with his new girl and became a brother to a Cavalier puppy named Cooper. Cooper had separation anxiety and he missed his girl when she was at work. Harley was the companion Cooper needed. They bonded instantly, and Harley adapted to city life.

The boys were total opposites.

Cooper was the perfect gentleman, with his soft step, quiet nature, and good manners. In contrast, Harley was more Animal House frat boy, full of uncouth behavior:  loud barking, belching after every meal, tooting,  butt-scootin’ on the carpet, and of course, the most disgusting and disturbing of all canine behaviors….poo-eating.

Cooper was dignified and reserved. Harley was a party on four legs and loved everyone. This odd couple embarked on the adventure of life, like a pair of bookends. 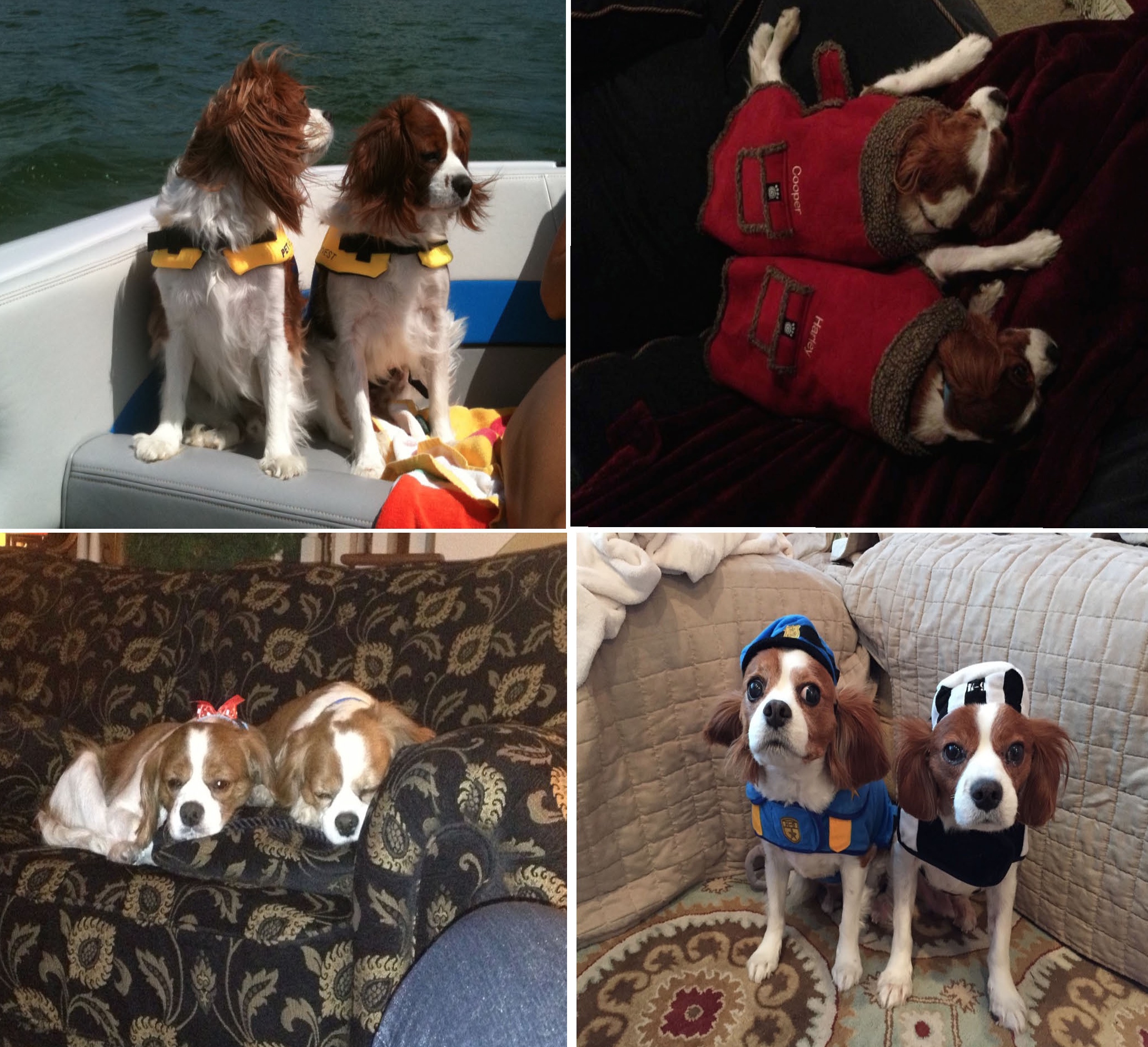 When his girl introduced him to a guy she liked, he liked him, too.

When the guy officially joined their pack, he happily wore a bow tie. 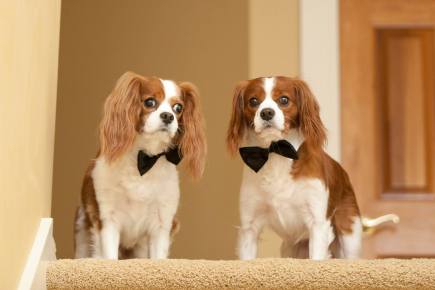 As their pack grew, he welcomed each new member and treated them just like he did Cooper. He loved them, but he also stole food from them…every chance he got!

Cooper, babies, toddlers, preschoolers and even his girl and guy fell victim to Harley the scavenger.

Goldfish,  Hawaiian rolls, chicken nuggets, an entire sandwich, or a slice of pizza could all be stolen and  “Hoovered”  at an alarming speed by Harley.

In possession of a stolen granola bar – allegedly.

Harley and Cooper enjoyed 8 years together, until due to a heart condition,  Cooper went to heaven.

We were all heartbroken that day, especially Harley.

Finding a canine sibling for him was never an option. Harley didn’t like other dogs. Cooper had been the only dog for him.

Now he was without his best friend.

What would Harley do?

Would Harley be content with his girl, his guy and his human siblings?

Very quickly, Harley reacted the way he knew best: He adapted, and he remained positive.

After all, even in those hardscrabble beginnings his tail was wagging.

And he sure received a lot of hugs. 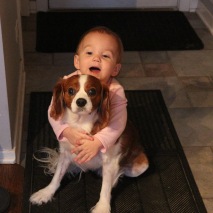 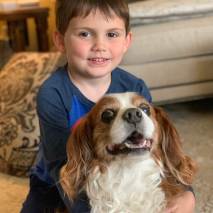 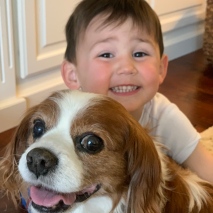 He was content in the middle of the action 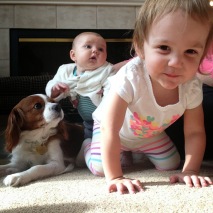 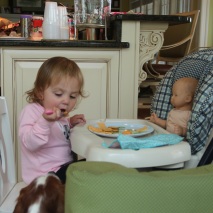 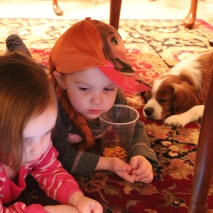 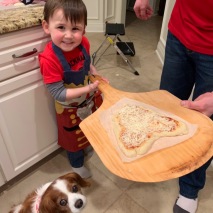 The truth is, Harley had always been sort of a mess.

Perhaps he was the product of a puppy mill. We’ll never know.

As he matured, he looked like he was put together all wrong. His back legs seemed longer than his front legs, he had a bit of scoliosis, and he had a funny, sideways gait.

He didn’t care. He scampered around quite happily.

Like a mountain goat, he’d scale any height if he smelled food, and thought there was a chance he could reach it. 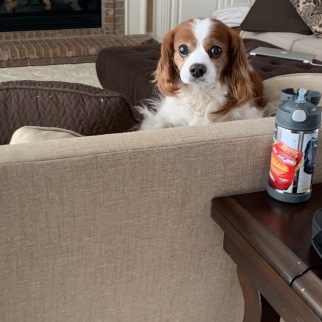 He tried to be a good boy, but he just couldn’t help himself. He’d succumb to temptation!

Without Cooper to snuggle with, Harley believed he deserved the ultimate in luxury. A pile of pillows, a stack of blankets, and the highest point on the couch were his favorite spots to nap. 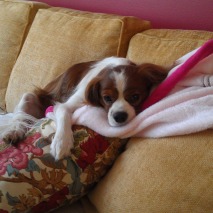 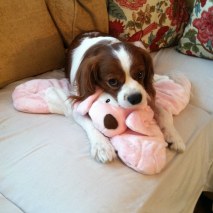 Harley was cursed with terribly itchy skin. During his early years,  he sometimes looked like he had chicken legs -having chewed off the fur in an effort to attack the itch. After his Doggie Dermatologist determined he was allergic to evergreens and grass, we understood why Harley preferred to poo on the sidewalk.

During Summer months at the lake, Harley insisted on pooping in the middle of the lane – no matter who was around. Morning walkers and runners had to step around him. Workmen, Fedex and UPS drivers, and neighbors were held up until he found  just the right spot, and then he took his sweet time gettin’ down to business.

Since his allergies meant he was never a fan of the great outdoors, he adapted.

He didn’t chase squirrels around the yard, but did he hunt indoors.

He was always on high alert, even when it appeared he was sound asleep. No 4-legged creature on the TV screen- real, animated or stick figure, could sneak past Harley.

While he never enjoyed lying under a shady tree,  he never missed a chance to curl up under an artificial Christmas tree! 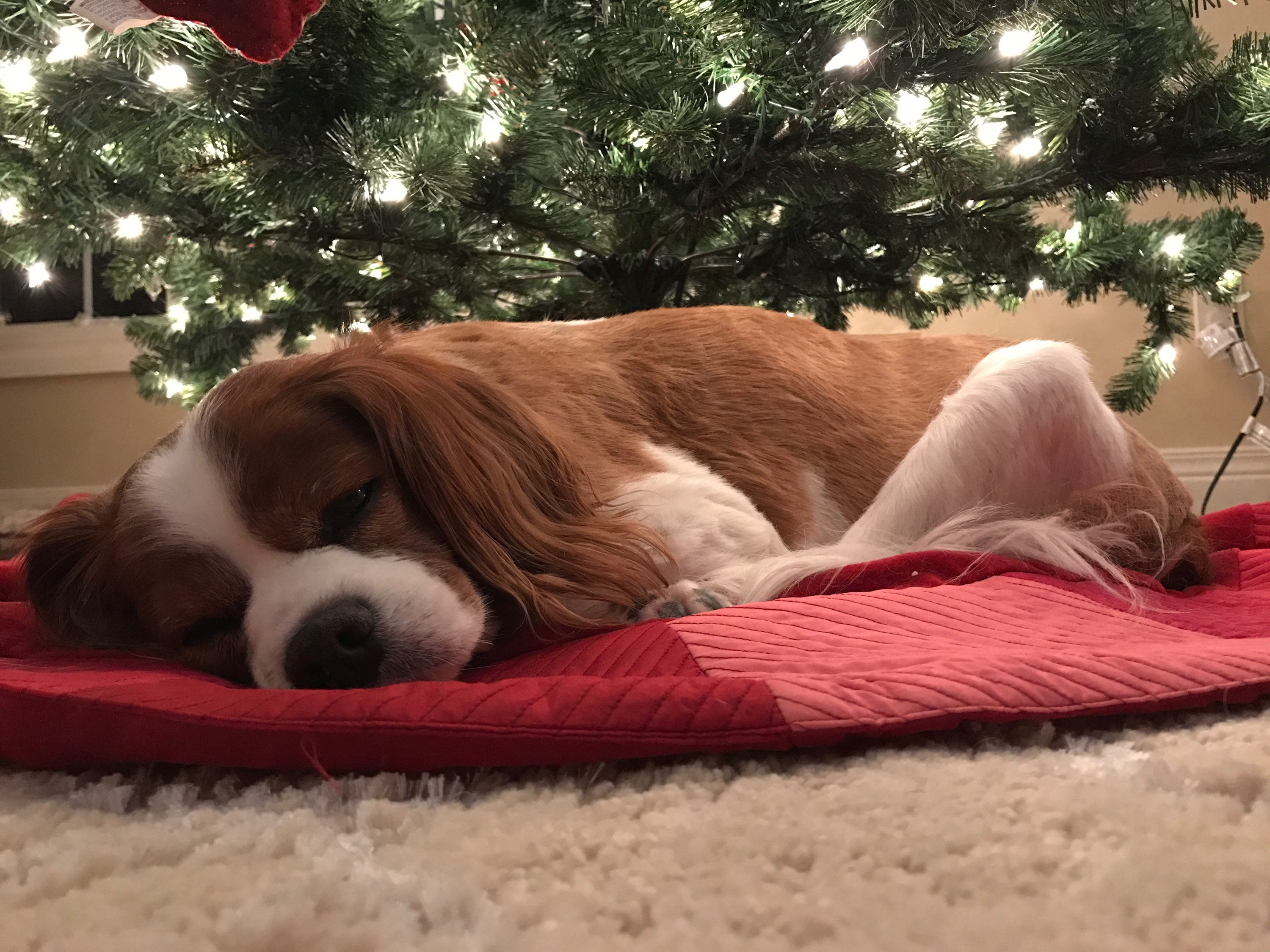 He wasn’t blessed with a beautiful voice, but that didn’t stop him from singing with great enthusiasm…especially to the General Hospital theme song! He was also known to sing an operatic solo in the middle of the night – while he and everyone else was sound asleep!

In his later years, he became deaf. He could no long hear the sweet music of his people’s voices. He still smiled and wagged his tail when anyone made eye contact with him, and he learned to follow a few hand signals.

He spent most of his time snoozin’ in the corner, but he still knew when it was time for breakfast and dinner. He would stand near the pantry and let everyone know it was time for him to eat.

Then he grew forgetful, and some nights persisted in asking for dinner after he had already eaten!

Even though he still looked like a puppy, he had grown to be an old man.

His sweet disposition had never changed.

On Friday, his family knew it was time to say goodbye and let Harley go.

That morning, as his girl explained to his three sad, little humans that Harley would be going to heaven, Harley spotted an abandoned pack of mini-muffins up on the couch.

Naturally, he found the strength to make a grab for it.

Even though Harley didn’t feel well, he smiled until the end, and then… off he went…surely reunited with his best buddy, Cooper. 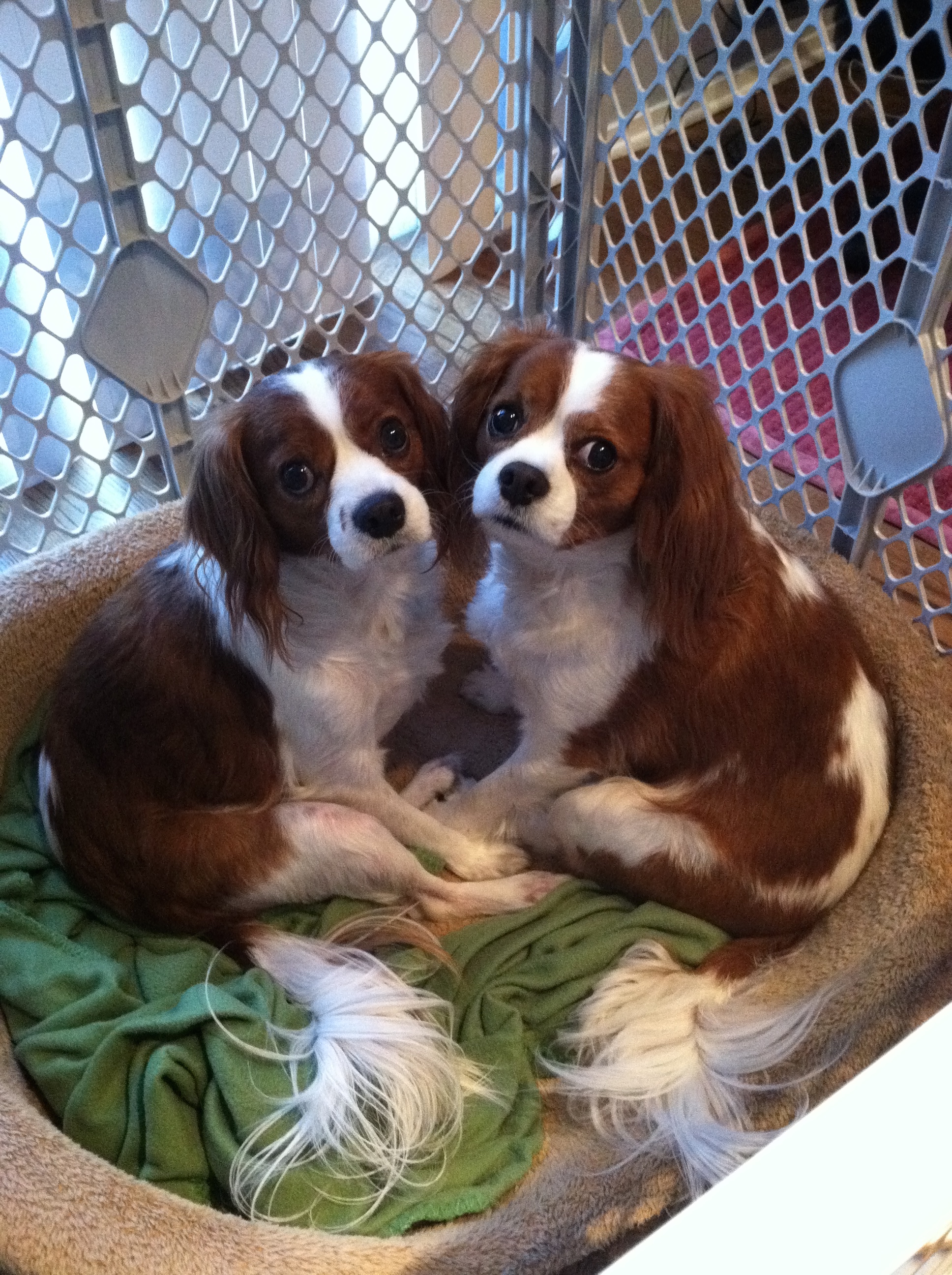 Of course, Harley went to Heaven!

Harley wasn’t a bad dog. He was a really good dog who just had some very bad habits.

We learned a lot from “That Dog!”

Realize there is always a reason to smile.

Go for the impossible.

Be a good buddy.

Well, except for the belching, tooting, and food stealing.